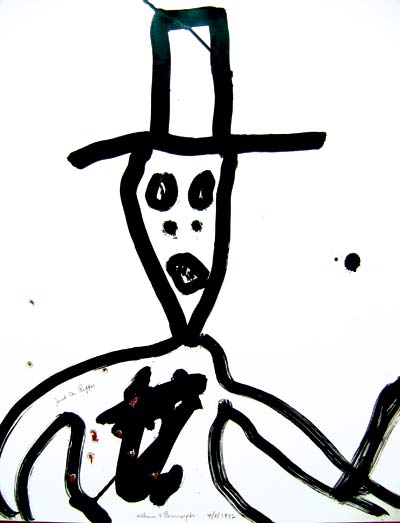 "I am trying like Klee, to create something that will have a life of its own, that can put me in real danger, a danger which I willingly take on myself"
William Burroughs, 'Painting and Guns' (Hanuman Books, 1992)


William Burroughs is known as the godfather of the 1950s Beat movement. His innovative writing style, often featuring a disjointed cut-up narrative and provocative subject matter has influenced authors, musicians, poets, playwrights and film-makers across the creative spectrum over the past fifty years.

At the legendary Beat Hotel in Paris in the 1950s, and in London during the mid-60s, the Harvard-educated writer created novels, sound-on-sound tapeworks, collages and graphics along with illustrated diaries, notebooks and scrapbooks with his collaborators and friends Brion Gysin, Allen Ginsberg and Jack Kerouac. Burroughs was as interested in making visual work as he was in the power of the written word. The Riflemaker exhibition will show work across every medium but will concentrate on Burroughs' considerable output of collages, paintworks, shotgun-targets, canvases and wood sculpture. During his lifetime William Burroughs had solo exhibitions at Tony Shafrazzi and Gagosian in New York.

"A true genius and first mythographer of the mid-twentieth century, William Burroughs is the linear successor to James Joyce. Naked Lunch is a banquet you will never forget"

CONTENT OF THE EXHIBITION: Part 1: 'Dead Aim'
Forty rifle-range 'shot-targets' ( the infamous 'shot sheriff' drawings ) never seen before, with spraycan paintings and canvases and related photographic and documentary material. This exhibition is in collaboration with the William Burroughs Estate in Kansas, USA. It is curated by Riflemaker along with Jose Ferez Kuri and James Grauerholz from William Burroughs Communications. Grauerholz, Burroughs biographer, wrote the text for the book to accompany the exhibition, which also features an essay about target-shooting by Burroughs' collaborator Steven Lowe. Photographic images are by Gerard Malanga and Robert Mapplethorpe.

THE 'SHOT SHERIFF' DRAWINGS:
The hand-drawn target series referred as The Most Wanted began on January 11, 1992 at the farm of Fred Aldrich near Lawrence, Kansas. The date is marked on the first target shot, signed and dated William S. Burroughs. Burroughs used mostly his Smith and Wesson .38 special on these targets. A figure would be drawn, the gunman would get in the mood, pace around, then shoot into it with his handgun, the holes and powdermarks creating shade and depth in these 'alien' forms. The marker-pen and brush drawings were then embellished with ink or small pools of watercolour. Riflemaker will exhibit forty from the series of seventy figures.

Fellow Burroughsians and leading field experts Oliver Harris, Ian MacFadyen and Terry Wilson present an illustrated multimedia talk at Riflemaker on Monday the 7th of November 2005 at 7 pm and 9 pm.

ABSTRACT: In the summer of 1953 William Burroughs took the hallucinogen yagé in the remote Amazonian jungles of Peru. As the wracking nausea gave way to a series of fantastic visions, he
recognised reaching a turning point in his creativity. Words seemed unable to capture the experience: If I could only paint, he explained to Allen Ginsberg, I could convey it all.

Oliver Harris, Ian MacFadyen, and Terry Wilson take this moment as the starting point for a series of explorations into creativity, guns, hallucinogens, and the relation between the verbal and the visual in Burroughs work.

Focusing on the events of 1953, Harris will read and present materials from his forthcoming new edition of Burroughs Yage Letters, while MacFadyen situates Burroughs in relation to a broader aesthetic field of experiment and Wilson explores the mystery of yagé through his own experiences in
Peru. 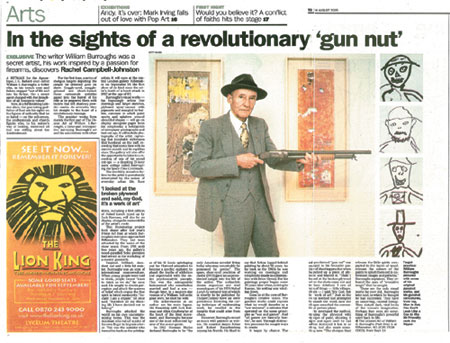 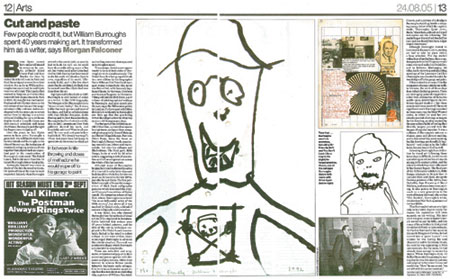 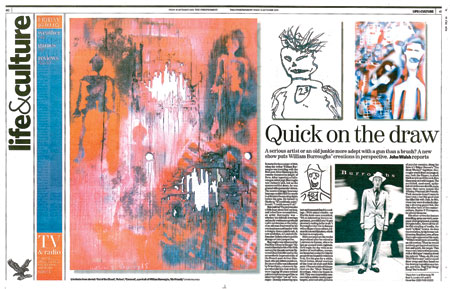