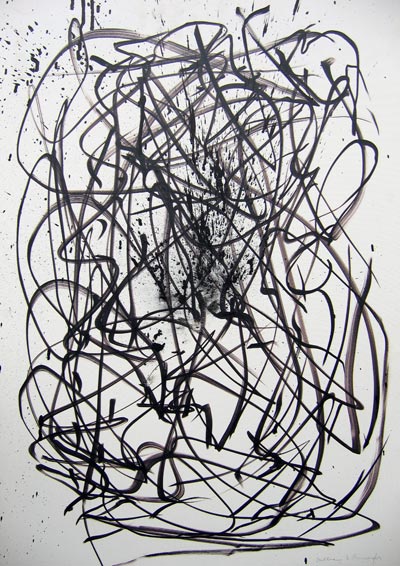 I am trying to get the pictures to move. It almost happens: a face comes into almost miraculously clear focus, smiles, snarls, speaks...
Look outside at the trees and leaves in front of the bedroom window. They move in the wind. The same thing is happening. I see faces, scenes... There are green monkeys, a green man, very serene. I dont have to go to outer space for aliens. They are all around me

The creator has committed himself to the fearful adventure of taking upon himself, to the very end, the perils risked by his creatures


William Seward Burroughs II was born on 5 February 1914 in St. Louis, Missouri, the geographical dead centre of the US. He wrote his first story The Autobiography of a Wolf and used his first handgun at age eight. Until he was fifty-one William Burroughs lived on an allowance from his family; his grandfather William Burroughs I was the inventor of the Burroughs adding-machine*. WB graduated from Harvard in 1936. Ten years later Burroughs discovered junk ecstasy and a lifetime addiction began. In 1952 he accidentally shot and killed his wife Joan at a party while the couple were performing their 'William Tell act'.

In 1953 WB travelled to Colombian Amazon where he experimented with the entheogenic vine Yage, and then to Tangier with the composer and author Paul Bowles. In Morocco he met the artist Brion Gysin who was to be a huge influence on his thinking, writing and visual art. In 1958 William Burroughs moved to the "Beat Hotel" (9, rue Git-le-Coeur) in Paris with Allen Ginsberg before travelling to London in 1960. Burroughs wrote prolifically and lived nomadically throughout the sixties and returned to New York in 1974. Not long thereafter he met his editorial assistant James Grauerholz before moving to Lawrence, Kansas in 1981. William Burroughs was celebrated as a major literary figure throughout the last two decades of his life and had solo exhibitions at Gagosian and Tony Shafrazzi in New York. He died in Lawrence of a heart attack on August 2 1997 aged 83.

Burroughs' literary output was largely autobiographical and influenced by his friends Jack Kerouac, Allen Ginsberg, Neal Cassady, Herbert Huncke, Brion Gysin and Paul Bowles. Ginsberg acted as surrogate literary agent and arranged for publication of Burroughs' first novel Junkie: Confessions of an Unredeemed Drug Addict (1953 Ace Books). But publication was only deemed possible by coupling it with another - Narcotic Agent - by Maurice Helbrant (tag line: "Gripping True Adventures of a T-Man's War Against the Dope Menace"). Junkie was issued as a 'double book' in order to counteract any potentially harmful effect.

However, it was William Burroughs' second novel, the groundbreaking Naked Lunch (1959 Olympia Press) - title by Kerouac - with Gysin's calligraphic art on the cover, which made his name and led to him being called "the true genius and mythographer of the mid-20th century" (J.G. Ballard).

The thirteen reel cut-up known as Space Time Continuum was created using 'domestic' reel-to-reel, sound-on-sound technology available in the mid-sixties. The cut-up concept, with its roots in Surrealism and the poetry of Andre Breton and Tristan Tzara, released Burroughs from the constraints of linear narrative. One section, 23 Skidoo, recorded at Burroughs' loft at 210 Center Street in Lower Manhattan in June 1965, consists of two parallel tracks, the first combining cut-up texts with newspaper disaster reports. This 'work-in-progress' combines radio cut-ins with a top level track of Burroughs reading from his own work. The radio station frequently alights on shortwave static or Morse-code, switching from German to Hispanic stations as well as English language news and music output.

Another section, featuring Burroughs and recording engineer Ian Sommerville repeating the Hello, Yes, Hello sequence (another version features the Anthony Balch film Towers Open Fire - 1963) was recorded in Paul McCartney's small recording studio in Montagu Square, London W1. Burroughs and McCartney met there several times during 1966. The sequence mixes different radio stations, TV shows, fragments of a BBC Shakespeare play, radio static, and newspaper bulletins as well as his own texts (including discussions about the cut-up technique itself), which sometimes cut into each other. None of the material has ever been released.

These early acoustic experiments and the possibilities they imply have had a wide-ranging impact, (the use of tape-collage on Sergeant Pepper and Bowie's Hunky Dory lyrics are a direct link) to their influence on the avant-garde (Laurie Anderson, Brian Eno, and Bruce Nauman, among others) and modern day 'sampling'. With a total duration of approximately twelve hours, the work provides a valuable insight into Burroughs' methodology and constitutes an important document of his expansion from cut-ups on paper to vocal permutations, sonic experimentation and film.

For Pistol Poem, the second part of The Unseen Art of William S. Burroughs, Riflemaker will combine a further exploration of Burroughs principle works of visual art with a detailed literary and biographical archive. Featured will be rare editions, manuscripts and letters, archive photographs, shotgun paintings, spray-can illustrations, collages, reel to reel cut up audio tapes, file folders and works on paper. This exhibition is in collaboration with the William Burroughs Estate in Kansas, USA. It is curated by Riflemaker along with Jose Ferez Kuri and James Grauerholz from William Burroughs Communications. Grauerholz, Burroughs biographer, wrote the text for the book to accompany the exhibition, which also features an essay about target-shooting by Burroughs' collaborator Steven Lowe. Photographic images are by Gerard Malanga and Robert Mapplethorpe.

ARTWORKS FROM THE ESTATE OF WILLIAM S. BURROUGHS
EXHIBITION LISTINGS