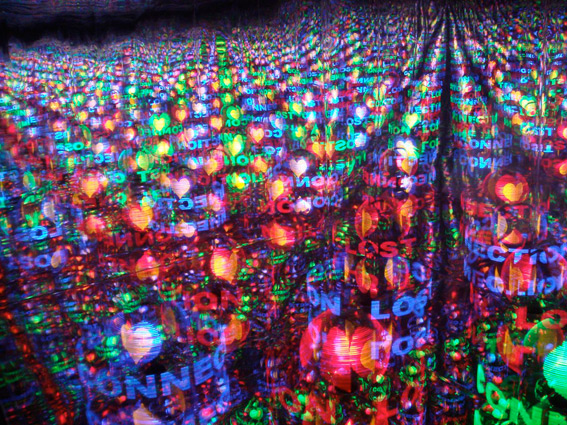 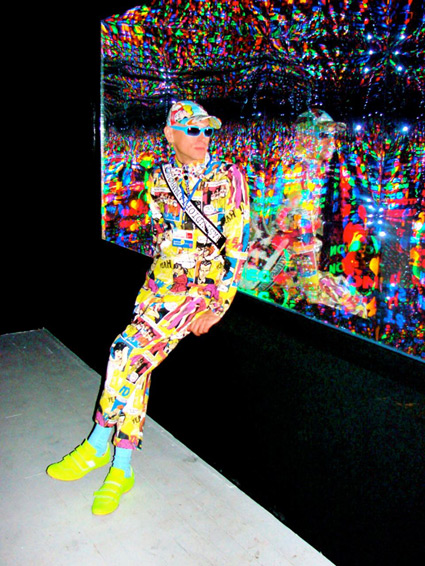 The queues outside the Russian Pavillion at this summer's Venice Biennale were caused in part by Andrey Bartenev's apocalyptic Disco-Nexion.

Bartenev's 'glass discotheque' depicts a lake of mirrored light spheres with the words "connection lost" circling in endless orbit. A tiny heart planted inside each one symbolizes the frustration that awaits us all in this world of virtual and passive communication. The message endlessly reproduces itself within it's virus-like blur; a whirl of letters and mirrors creating its own new connective structure. This microcosmic dancefloor, on which the revellers are almost touching yet still dance alone, becomes a metaphor for the alienation of today's virtual, simulative communities. Disco-Nexion will be remixed at Riflemaker from December 2007 through February 2008.

"Bartenev is the last word in freedom of expression. His work invites comparison with that of Diaghilev and Meyerhold"


"If I weren't an artist, I would be a dancing pianist. When I'm not creating art, I enjoy swimming in the pool at night. People who know me best might describe me as a 'Russian from the moon'. They might be surprised to learn that I'm from Venus. The best advice I ever received came from Paco Rabanne, he said: "Don't be in a rush to leave". Andrey Bartenev, Moscow 2007

On Monday 14 January, artists, curators, writers and Russian supermodels crowded into the lower gallery at Riflemaker to witness a unique performance of MOUTH OFF! by Andre Bartenev. Accompanied by Sasha Fromolova and her trio and various aides and abetters, Bartenev, constricted by having his mouth removed by masking-tape, proceeded to list, helped by the audience, the activities it would not be possible to do without a mouth. This at times hilarious comment on censorship resulted in a roomful of statements - "He cannot eat asparagus", "He cannot speak evil", "He cannot kiss Kieta . . ." "He cannot irritate gallery staff!". After which, the congregation retired upstairs to use their mouths by imbibing as many Black Russians as they could manage - lovingly prepared by cocktailmeister, Dr Frank Cobra (MRSA)

The Mouth Off! installation remains at Riflemaker until 28 February.