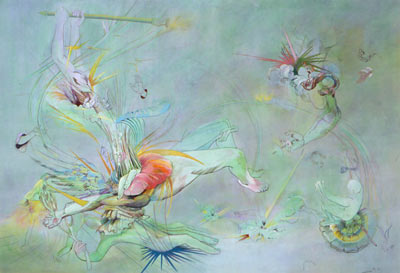 Francesca Lowes Bloom Nasty series, produced during and just after her MA at the Royal Academy, is exuberant and darkly theatrical in tone. The dramatic canvases are large-scale and painted in saccharin sweet pastels, which range from baby pink to eau-de-nile. The paint is applied in thin, flat, fresco-like washes and Lowe scatters the surface with her vocabulary of delicate images that are reminiscent of nineteenth century childrens illustrations. These include perfect, muscular body parts, fluttering Baroque-style clouds, surgical instruments, gossamer wings and cartoon-like starbursts. The elements are then combined to form impossible, paradoxical hybrids that evoke a contradictory dream world of sadistic, instinctual drives.

In Semblance beating wings and sinuous arms sprout from a hand, which rests on a pea green leg that seems to be striding forwards. A hand wielding a knife emerges from the muscular, green thigh. Flayed flesh cascades downwards (like the fluttering skirts of the Victory of Samothrace) and the whole totem pole of fragments grows from sturdy, masculine calves.

In Bloom Nasty, a blue feathered wing, two female fingers and a frothy spout of water erupt from the innards of a headless nude. Above, a pair of pole-wielding arms attack the figure, which rests on a giant lace-cuffed hand. Elsewhere, hands raised in benediction appear to condone the violence and a single muscular arm, held in an antiquated surgical clamp, bursts from a ragged cloud formation.

Such Alice in Wonderland images of fantastic, illogical conjunctions playfully subvert all sense of bodily integrity. They are impossible products of the imagination. As such, they evoke the comical world of Medieval grotesques, those hybrid creatures who cavort across the margins of illuminated manuscripts and combine human with animal characteristics.

Yet this is also the world of Cadavre Exquis or Heads, Bodies, Legs, the game of illogical conjunctions so loved by the Surrealists, and Lowes images are generated by similar principles of free association and collage. As in Dada and Surrealist word games, Lowe lifts images from their normal surroundings and combines them to produce fantastic, unexpected pairings. During the nineteen twenties and thirties the Surrealist Max Ernst raided magazines and illustrated books, cutting up images and giving an aeroplane female arms or a beautiful woman an anteaters head. The products of Ernsts manipulations are unsettling and intended to undermine everyday logic. Yet like Lowes images, their impact lies in the fact that each element is fully recognisable.

The building blocks used by the Surrealists to construct their poems and collages were ordinary words and images, and this is similar to Francesca Lowes methodology. She uses a vocabulary of immediately recognisable forms that are lifted from a range of sources including medical illustrations, cartoon graphics and academic pattern books. The motifs then become part of a vast encyclopædia of fragments or quotations that plaster her studio walls. Lowe refers to the images as Lego pieces or stock phrases and they form the building blocks from which she constructs her collage monsters.

The image types that occur most frequently in Francesca Lowes paintings are of beautiful, muscular limbs taken from pattern books. They are now an almost forgotten form, but from the sixteenth to the nineteenth century they were one of the mainstays of artistic practice. The books were a type of visual dictionary or encyclopaedia: a how to manual that contained images of body parts depicted from every possible angle or point of view. It was a lexicon of rules for the classical tradition and the pages contained row upon row of idealised, perfectly formed fragments, from hands and feet to arms and legs.

Pattern books disseminated the official language of art: the language of beauty. They contained the Lego pieces of their day and artists combined the various parts to construct an endless variety of different figures. The underlying logic of assembling elements can be seen as a form of collage, and so in principle if not in practice anything could be combined with anything else. It is here that Lowe subverts the tradition and undermines Western ideals of beauty and unity. She employs the muscular fragments and the concept of interchangeable elements. But instead of creating heroic, idealised figures, she assembles the parts to produce impossible collections of dismembered limbs that have distinctly sadistic overtones.

This brutality is strengthened by the scenarios the paintings depict. Idealised arms and legs are held in sinister looking clamps or explode across the canvas. Carefully drawn, perfectly formed limbs are pierced and gauged, hacked and beaten. Vindictive hands emerge from all directions wielding knives, surgical instruments, saws and crowbars. Such scenes are aggressive and evoke the torments of Hell or the gruesome martyrdoms found in so many Renaissance and Baroque paintings. Yet despite the violence, the paintings are strangely bloodless. The beautiful fragments do not feel pain. They are attacked, but like St. Sebastian pierced by arrows or comic book superheroes, they neither bleed nor recoil in agony. Instead they erupt across the canvas or writhe and spin, falling back in rapture or soaring upwards amidst cartoon-like cloudbursts, stars and explosive rays of light.

The mood Lowe is creating is excessive, ecstatic and theatrical. It is also paradoxical. She is skilfully juggling comic book violence and energy with a sense of Baroque religious drama and desire. Like Berninis seventeenth century sculpture of the Catholic mystic, St. Theresa of Avila (where the saint swoons as an angel thrusts a golden arrow into her heart), Lowes images combine contradictory ideas and emotions. The paintings explore pleasure in pain or agony in ecstasy seen through the lens of a comic book lightness and exuberance. Opposites are brought together and the idea of collage, which Lowe uses to generate her monstrous conjunctions, can be seen to inform every aspect of the paintings.

Francesca Lowes world is thus an extremely theatrical one. It is explosive and dynamic. It is visionary and illogical, light hearted and serious, ecstatic and violent. Lowe is an artist who draws on a common Western heritage of images, styles and subjects. She is a bricolour who presents the voices of the past without serving up dried desiccated corpses. In her paintings the past talks with the present and traditional motifs and subjects are transformed to speak of contemporary fears and concerns. Pleasure and pain, desire and violence and comedy and tragedy are universal human themes and Lowe employs her delicate vocabulary of graphic fragments to explore them with wit, passion and unbounded imagination.