Jaime Gili (b. Caracas 1972) is a painter and printmaker whose canvases and installations draw on the history of sequential and op art in Venezuala. His art activities reference peripheral modernist art and architecture movements and the work of artists from a rich 20c tradition in that country.

Gili began his art studies in Prodiseño, Caracas in 1988. Moving to Europe in 1990, he lived and studied in Barcelona, concluding his BA in 1995 and a PhD from Universidad de Barcelona on 'Repetition in Art' in 2000. He also worked and studied in Lisbon, Paris and Berlin. He began his studies at London's Royal College of Art in 1996, graduating in 1998. He then completed several residencies and was the recipient of an Arts Council fellowship.

Gili is currently featured in the Whitechapel Gallery exhibition 'This Is Tomorrow' and in the current Saatchi Gallery's 'Newspeak 2'. Other recent projects include his five floor installation at Bloomberg, London as part of the Comma series, and his winning of the international competition to create the world's largest site-specific public art project; 25,000 square metres comprising sixteen large oil tanks along the Fore River in South Portland, Maine. Work began in 2009 and will take several years. In 2006 he made an exterior installation in paint and cut-vinyl around St. Paul's and Peternoster Square as part of the London Architecture Bienniel.

Gili's work features in many public and private collections.

Jaime Gili's exhibition The Lakes recalls the design created in Caracas by Brazilian landscape architect Roberto Burle Marx, as well as the history of additions and interjections which have plagued it since its conception.

Opened in 1961, Parque del Este (Park of The East) is a jewel of modernist architecture. Gili's new paintings and sculptures take as their compositional starting point an aerial view of the nine lakes in the original plans.

As a young artist growing up in Caracas, Gili witnessed various alterations to the parks' landscape, changes that he and many others have not always supported. The area and its rich history continue to inspire him - he has recently worked on a hypothetical commission for the original site, but still with Utopia at its heart.

In 1969, a full-scale replica of Nao Santa Maria, the ship that brought Christopher Columbus to America's mainland coast, was placed in one of the lakes of the park by the then Venezuelan government. The sight of a galleon style flagship anchored within a modernist environment seemed incongruous to many of those who visited.

More recently, the military government of Hugo Chávez, having considered this vessel a symbol of colonial power, proposed removing the replica, and replacing it with The Leander (another Columbus-style parody), one that, they say, transported the War of Independence leader Francisco de Miranda back to Venezuela.

Gili has always maintained that the park in its original state was a perfectly executed masterpiece, any additions being superfluous. The events surrounding The Lakes raise questions about public art and large projects; post-colonial politics and propaganda, Modernism and aesthetics, the specific history of the park in question, its shipwrecks, mini-Utopias; and failures.

For the first time the artist is using curves in his paintings; teardrops, paisley and foliate shapes set against modulating backgrounds  gestures which reference a very specific story of Venezuelan architectural design and the Lakes contained therein.

A Riflemaker book will be published to accompany the exhibition.

The Lakes is curated by Robin Mann 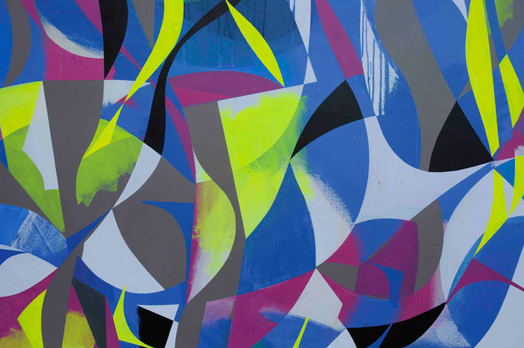 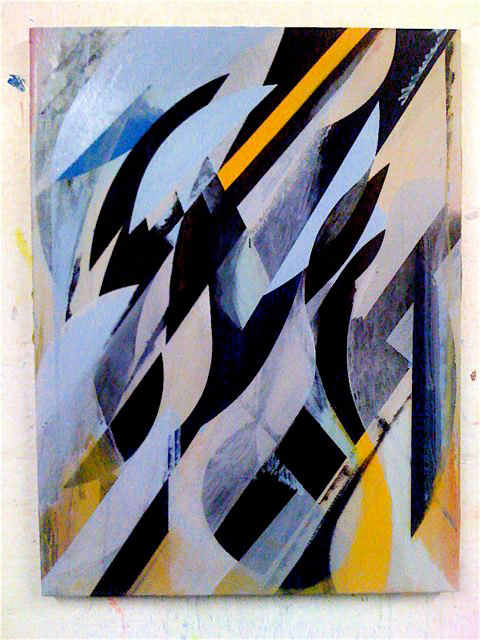 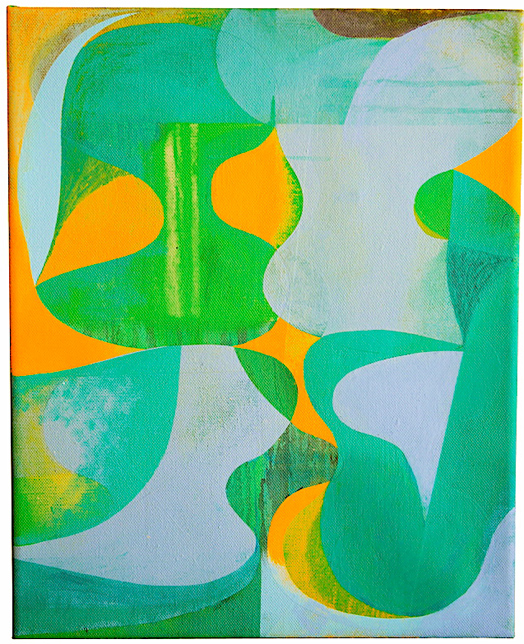 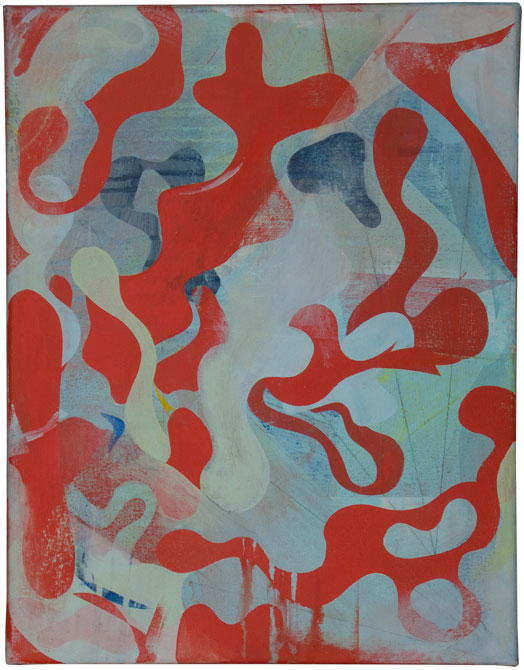 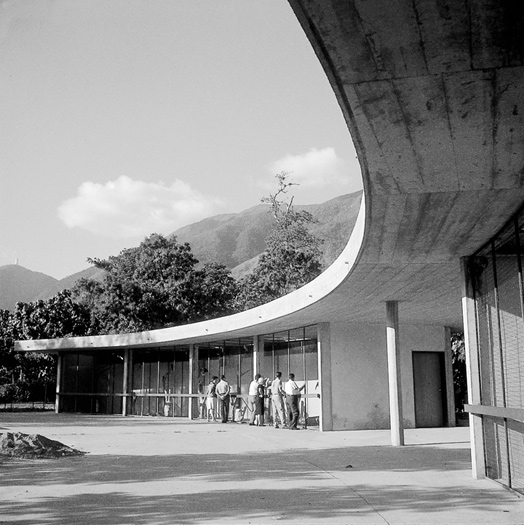 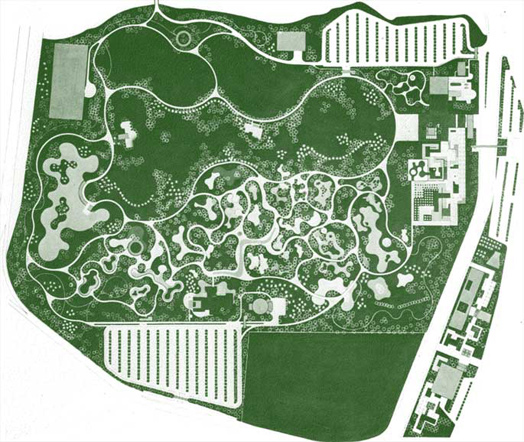 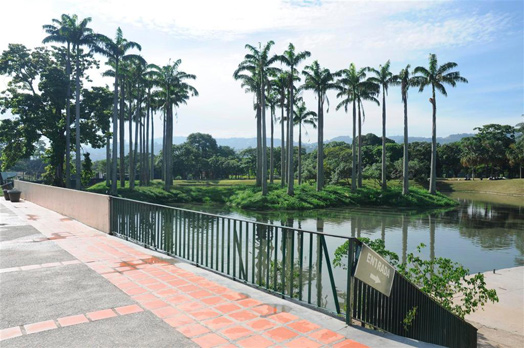 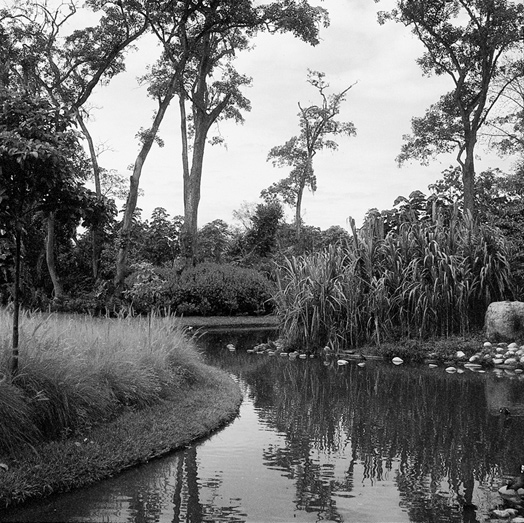 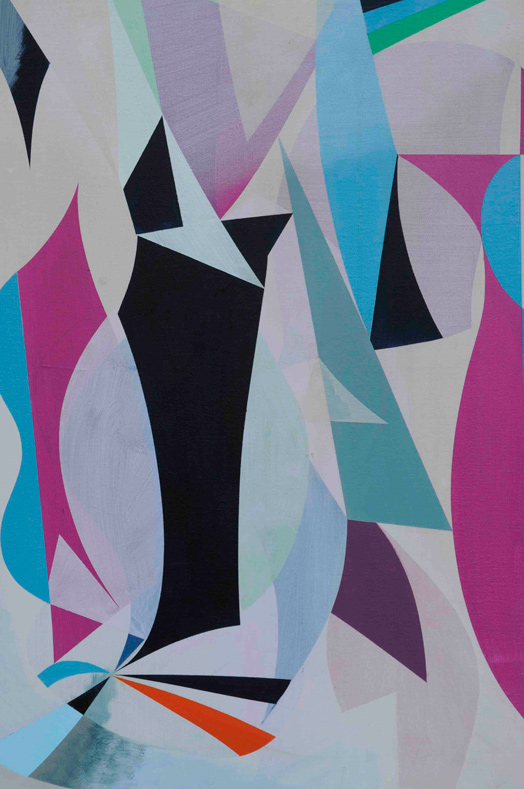 Download a PDF of available works by Jaime Gili here. 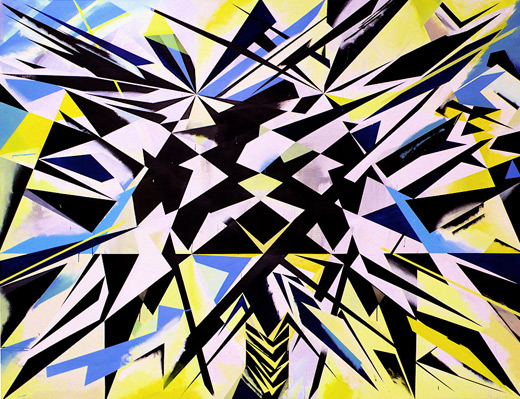 An excessive visuality of the explosion or crash - David Ryan / Artpapers

Jaime Gili was born in Caracas (Venezuela) in 1972. He grew up in a multicultural capital full of vibrant optical art, a concrete city full of optimism. Caracas, in the late seventies, presented its own version of the International modernism movement in art and architecture. Its own take on Utopia, the look of the city being created by artists and architects working together towards a single vision underwritten by a strong oil economy.

By the time Gili began his art studies in Prodiseño, Caracas in 1988, he was witnessing the willful destruction, dismantling and ruin of some of the citys major institutions, its architecturally important buildings and its urban, public art.

Moving to Europe (with his newly claimed EU passport) in 1990, Gili lived and studied in Barcelona, where he concluded his BA in 1995 and a PhD from Universidad de Barcelona on Repetition in Art in 2000. He also studied in Lisbon, Paris and Berlin. Jaime Gili has been based in London since 1996, when he began his studies at the Royal College of Art, graduating in 1998.

Gili is currently engaged in several series of paintings, curatorial projects and photographic works that reference historical and peripheral modern movements. His aim is to resurrect for the present the positive elements which served as a source of creative energy as he grew up. To bring about a new way to think Utopia. An ability to dream and be able to project and execute that dream.

In his latest work Gili depicts this imagined state, using signature forms which recall the best moments of modern abstraction, thereby creating a clash between imagined Utopia and reality.

In the last year, during two residencies and an Arts Council fellowship, Gili has developed various projects which link artists and art groups in Europe and Latin America, including two public poster series. Recent exhibitions include the experimental series of shows curated by Paul ONeill Coalesce: at Redux, London 2005 and Modelarts and Niland Gallery, Sligo, 2004. Jaime Gili will have a solo show at Riflemaker in November 2005.

He is the co-director of International Style, a network of artist-run spaces in blocks of flats and is invited regularly to lecture in English Universities and Art Schools. In his spare time Jaime Gili is the London correspondent for LAPIZ, the arts magazine based in Madrid.
Jaime Gili
LONDON ARCHITECTURE BIENNALE
FROM 16 JUNE
Jaime Gili 'Ruta Rota' - an installation at 5 Cheapside, London, (St Pauls Tube station) and 250 bus stops across the capital(London Architecture Biennale Route)

RUTA ROTA RUNS UNTIL THE END OF SEPTEMBER 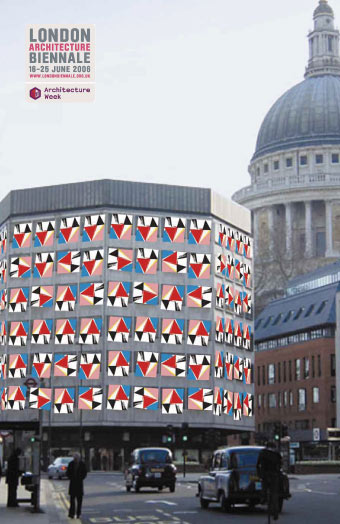 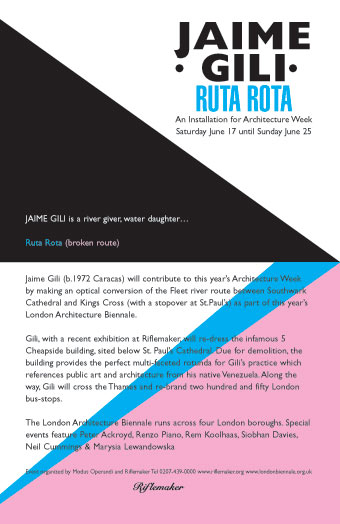 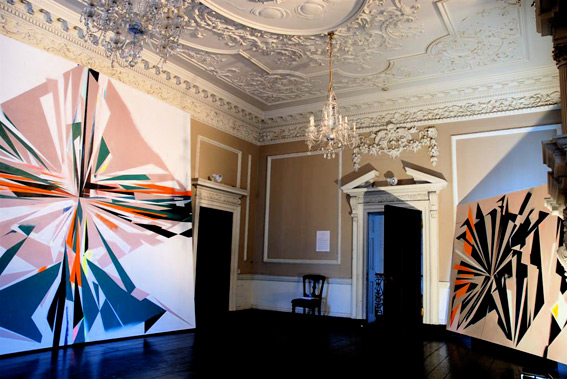 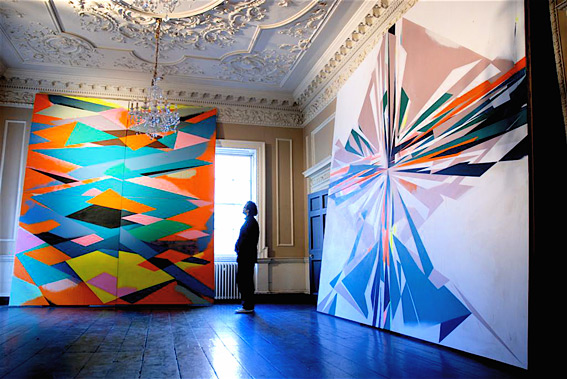 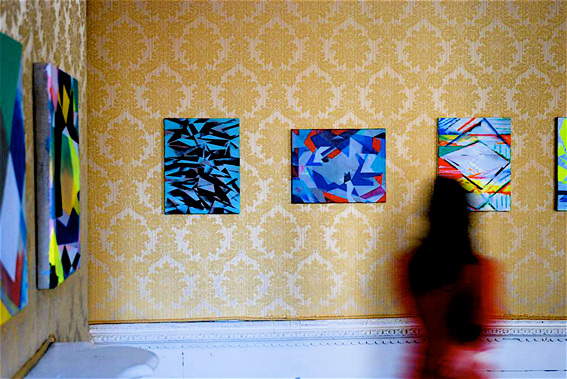 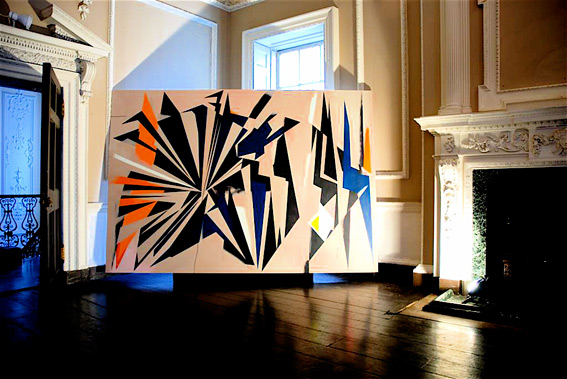 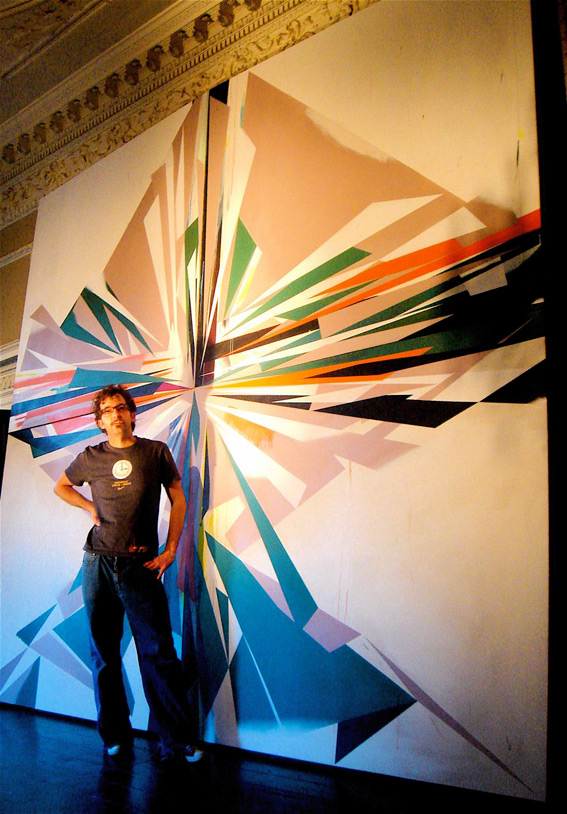 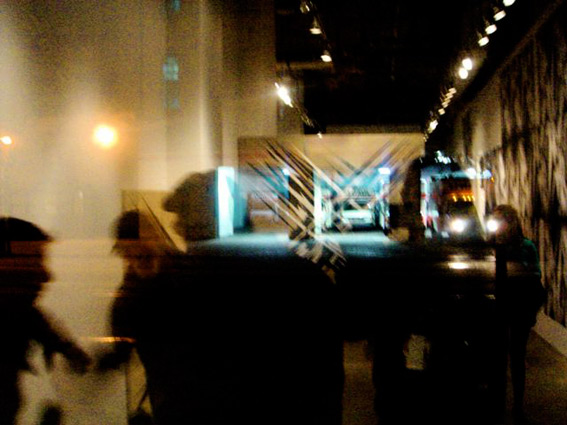 In 2005 Jaime Gili caused traffic chaos in London's Oxford Street with the 700,000 triangular pieces he installed in Selfridges store windows. In 2006 he created the six mile 'Ruta Rota' (broken route), an installation of buses from Southwark Cathedral to St.Paul's.

Gili's paintings are named after "those who have swept through my life like a hurricane". Friends who are literally 'superestrellas', (superstars), their impact and their identities frozen within the explosive, cubed icicles embedded in this series of celebratory canvases.

"Jaime Gili's work is as if someone threw a stone into a Cruz-Diez painting" (Jesus Fuenmayor, curator)