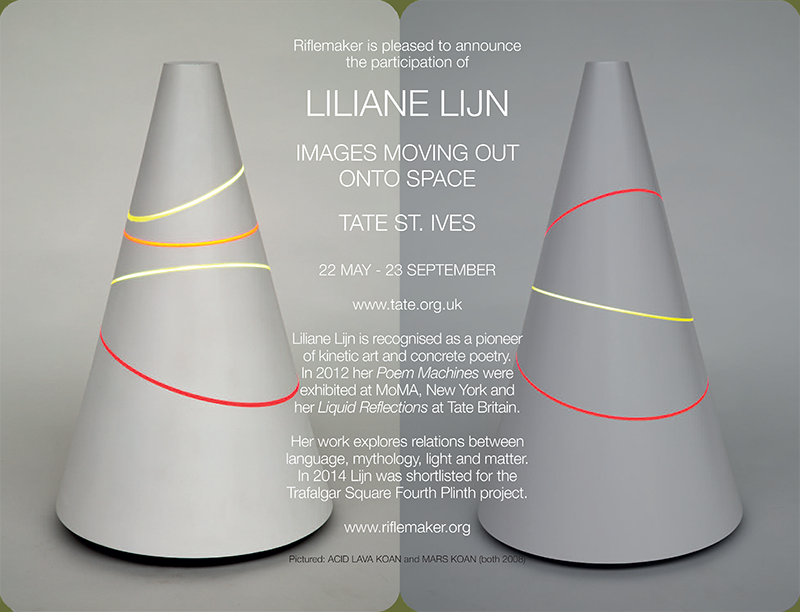 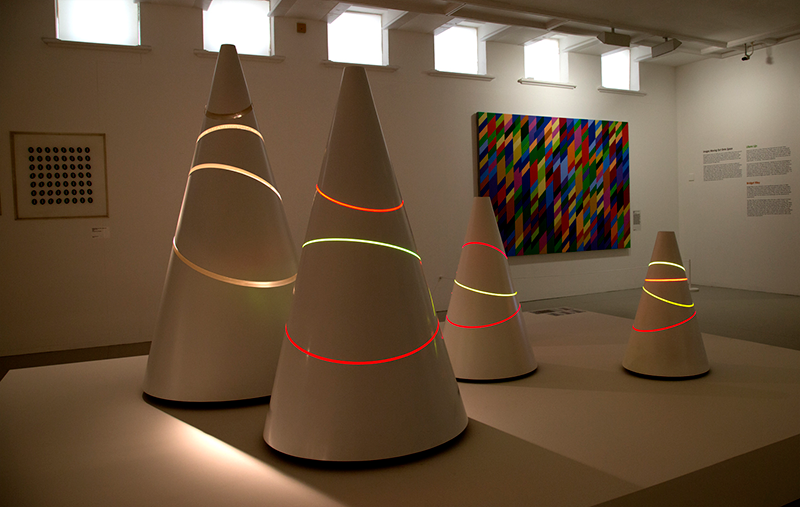 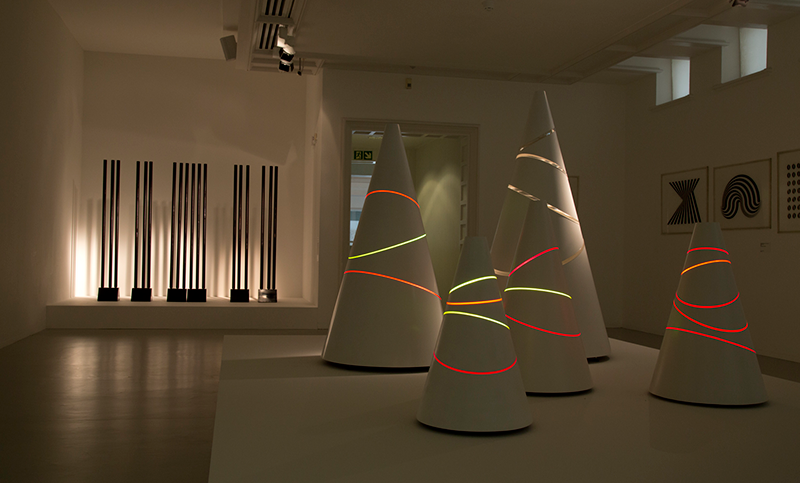 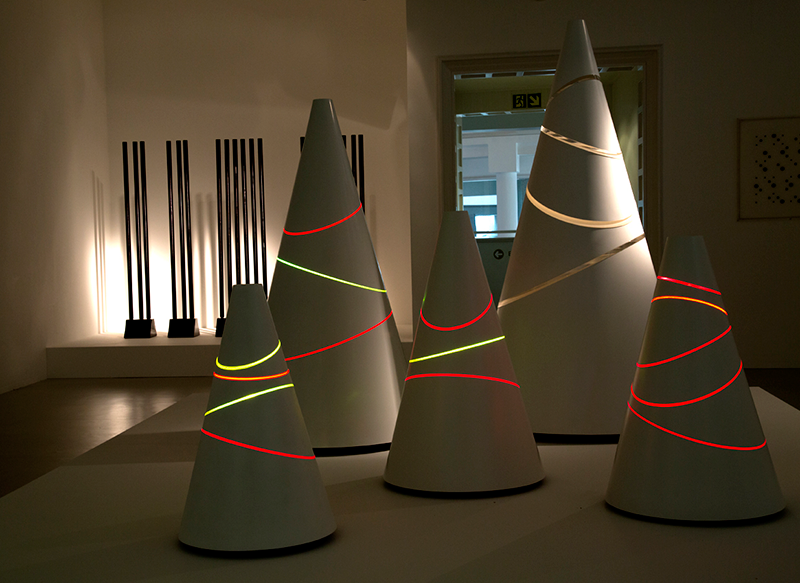 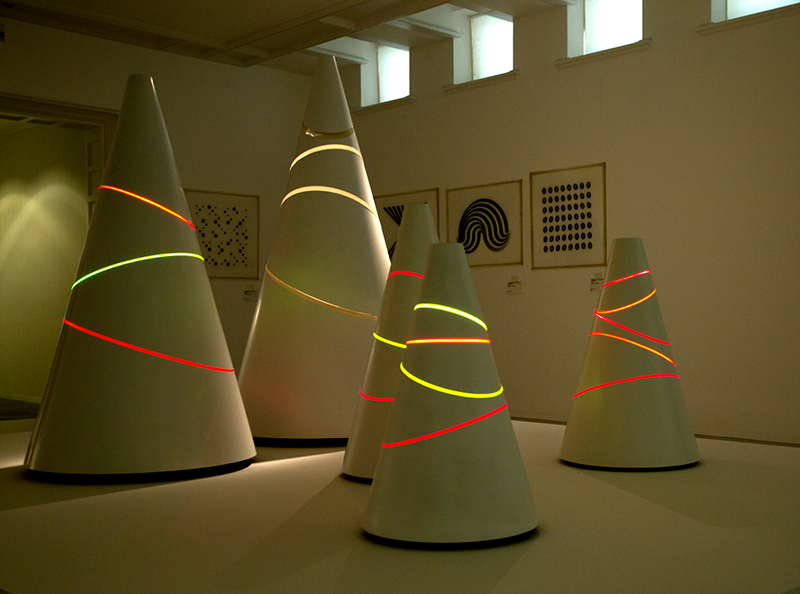 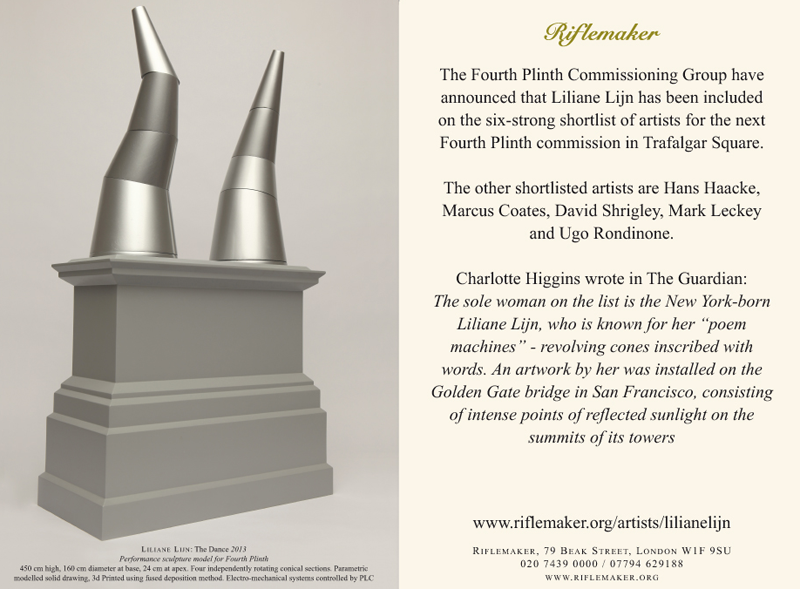 Cosmic Dramas brings together, for the first time, three important installations by Liliane Lijn. Using a broad range of materials, media and new technologies, Lijn entwines ancient mythologies with science-fiction in these key works, created in the 1980's. Between sculpture and theatre, the Lady of the Wild Things, Woman of War, The Bride and The Electric Bride are the result of a decade of research for a new feminine ikon. The exhibition also features studies and drawings from the artist's archive.

Cosmic Dramas is accompanied by a new monograph published by mima and designed by Richard Wilding. The publication includes conversations between Lijn and Althea Greenan, Curator

The Women's Art Library and Lijn and Guy Brett in an extract from Lijn - Brett: An E-mail Dialogue, accompanied by drawings and excerpts from the artists notebooks. Lijn's early kinetic poetry works were most recently featured in Ecstatic Alphabets at MoMA, New York. Her most recent exhibition at Riflemaker was the NASA-inspired Stardust. 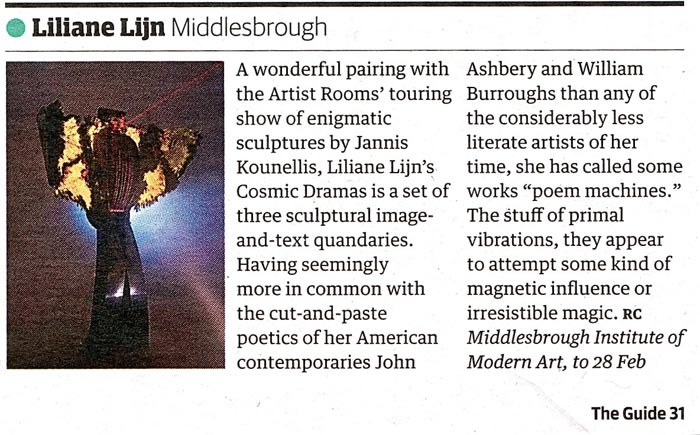 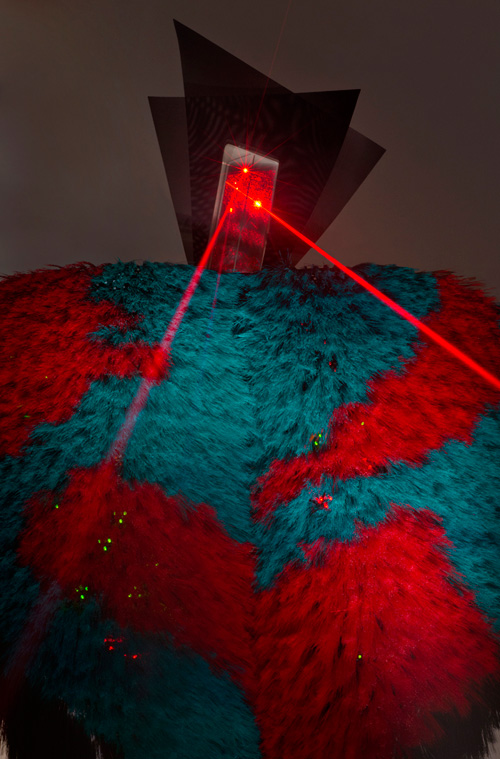 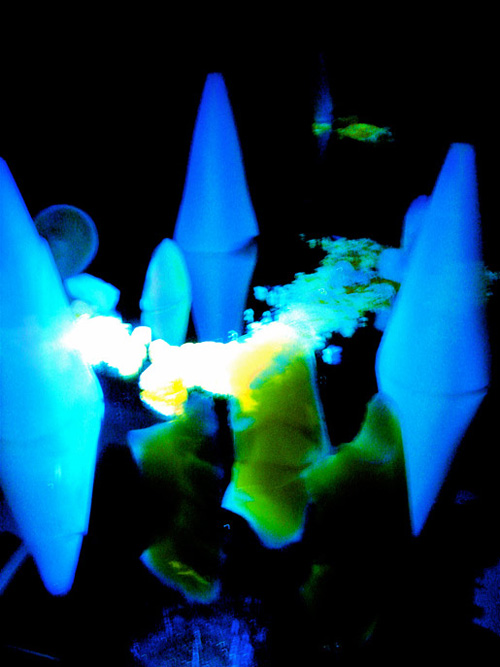 For the first time in history, stardust, particles of comets and burned out stars, have been brought to our planet from beyond Mars. An installation by American artist, Liliane Lijn which acts as a metaphor for this groundbreaking NASA mission, presents interstellar dust as cosmic ruins.

Lijn (b. New York 1939), who hung out with the Surrealists in the late 50s, took part in the first art 'happenings' in the 60s and modelled for Issey Miyake in the 80s is recognised as an early pioneer of art and science. In 2005, she was awarded an ACE International Fellowship co-funded by NASA and the Leonardo Network to become the first artist in Residence at the Space Sciences Laboratory, University of California, Berkeley.

Lijn's exploration of Aerogel, her creation of heavenly fragments consisting of whole and fragmented forms made from silicon-based Aerogel, the untouchable, ephemeral substance used by the NASA Stardust Project as the collector of interstellar dust, will be exhibited in Stardust, a glowing large-scale installation in the former gunmaker's workshop at Riflemaker.

The exhibition follows on from the artist's 2005 residency at the Space Sciences Laboratory, and is a collaborative dialogue with the revolutionary NASA funded Stardust Mission. Since her 3 month residency at SSL, Lijn has worked with the assistance of NASA scientists to transform the porous, sponge-like material using moulded conical and cylindrical forms. Also at the Space Science Lab, Lijn met and videotaped Dr Andrew Westphal at work with his assistant on the Aerogel slices only just returned from outerspace. Under their microscope, she noticed its 3D lattice structure and the conical impact craters of the stardust particles, which were reminiscent of many of the kinetic cone works for which she became famous in the 1960s.

Lijn takes inspiration from science, oriental and western philosophies and archetypal images of mythology. She says: 'I often make use of new technologies to create works that represent the world as energy. A constant dialogue between opposites, my sculptures use light and motion to transform themselves from solid to void, opaque to transparent, formal to organic.'

Stardust combines Lijn's use of a new futuristic material developed for space exploration with the artist's vision of stardust as crumbling ancient cosmic ruins. Concurrently Lijns films and documentary performance and interview footage, spanning her career from the late 50s to the present day, will be shown at Riflemaker on Beak Street including interviews with Dr Stephen Jones from the Jet Propulsion Laboratories (Pasadena) and Dr Andrew Westphal from the Space Sciences Laboratory (California).

The exhibition also coincides with Centrifugal: Liliane Lijn and Annabelle Moreau at the Royal Academy Gallery (New River Avenue, opposite Church Lane, N8) from 21 March to 4 May. This collaborative exhibition continues the gallery's programme of showing the complementary work of two artists of different generations. In this case, both artists are interested in the mechanics of the physical world.

Since her residency, Lijn has also worked in collaboration with astrophysicist John Vallerga at the Space Sciences Laboratory to develop a large solar land-art work, Solar Hills that will define the horizon with pinpoints of light

Liliane Lijn studied archaeology at the Sorbonne and art history at the École du Louvre, Paris (1958). She became an artist in residence in a plastics factory, experimenting with fire and acids and working with light, poetry, movement and liquids between 1961 and 1963, rapidly establishing herself as a leading kinetic artist through many international exhibitions.

For further information on the Stardust mission visit http://stardust.jpl.nasa.gov/home/index.html

LILIANE LIJN IS ALSO IN THE CURRENT EXHIBITION AT THE ROYAL ACADEMY CONTEMPORARY SPACE WITH ANNABELLE MOREAU UNTIL 11 MAY. 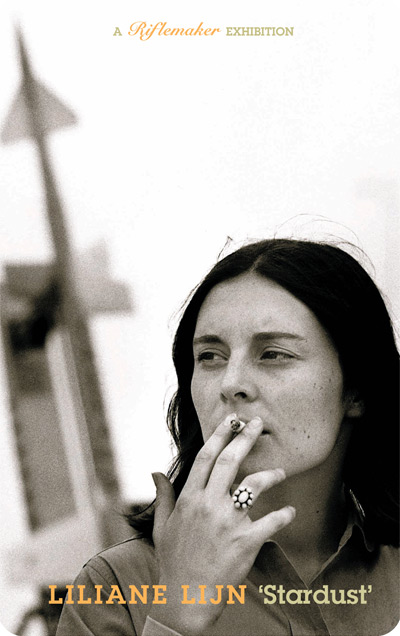 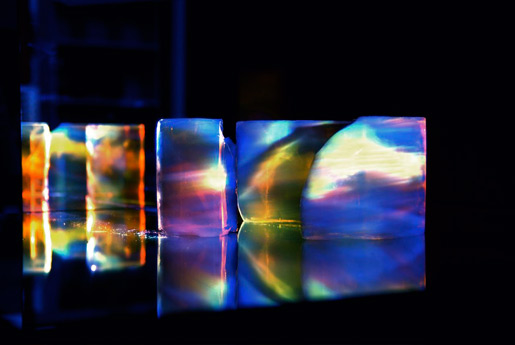 The first image of Stardust captured in Aerogel 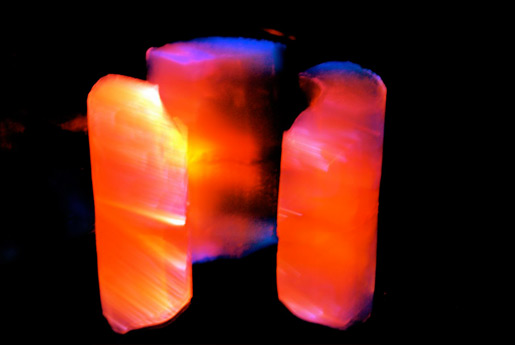 Liliane Lijn talks to Andrew Westphal, Director of the Stardust Project, at the Space Sciences Laboratory, Berkeley about capturing the dust of comets and stars and how her new work relates to his project. 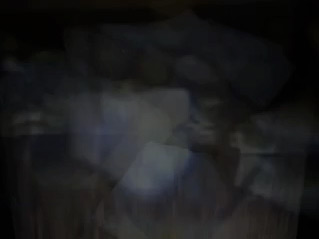 The film documents Lijn's continuing interest in cones, from 1964 to 1972. The title is taken from a Japanese koan, a Zen meditation riddle given to novice Buddhist monks as a tool to quieten the mind. As the title suggests, Lijn's koans attempt to dissolve matter and empty the mind 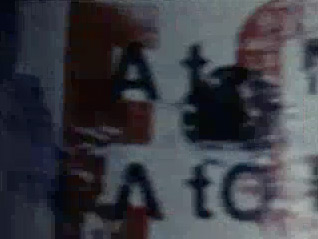 Watch Liliane Lijn's "What is the Sound of One Hand Clapping?" video 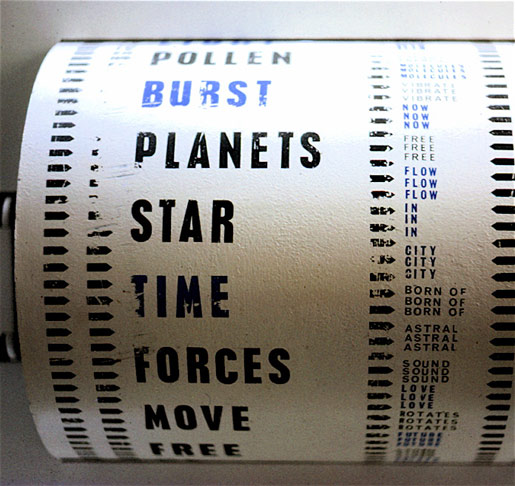