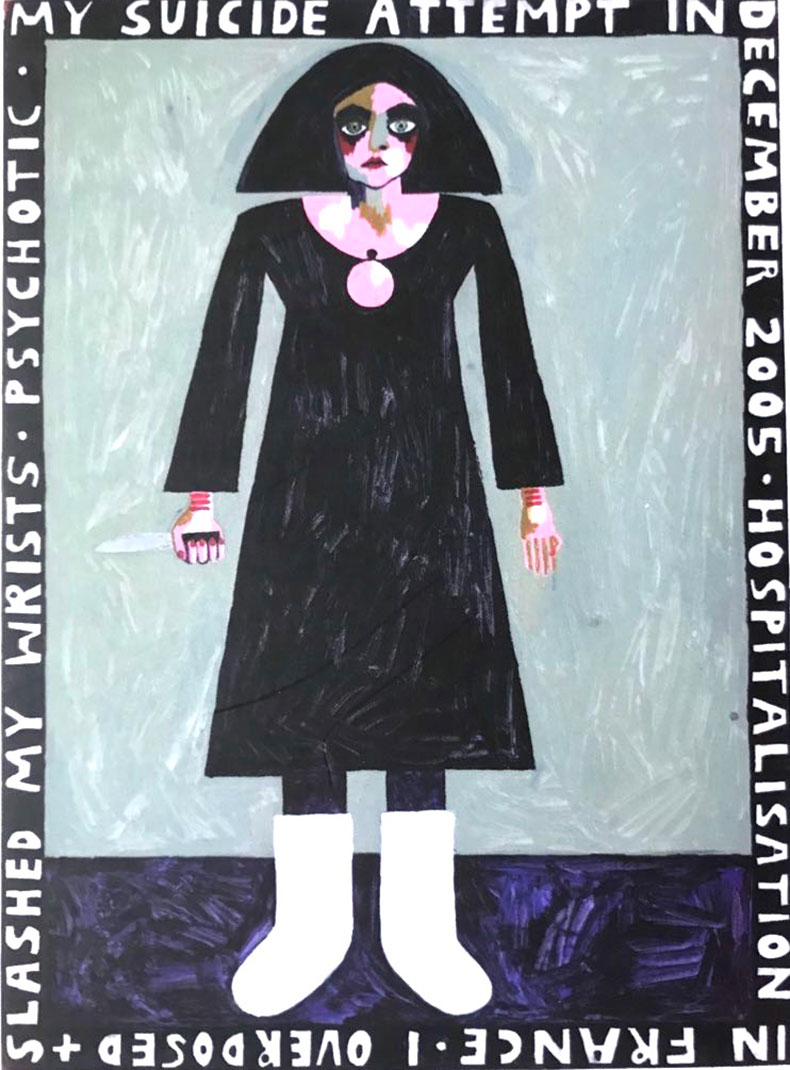 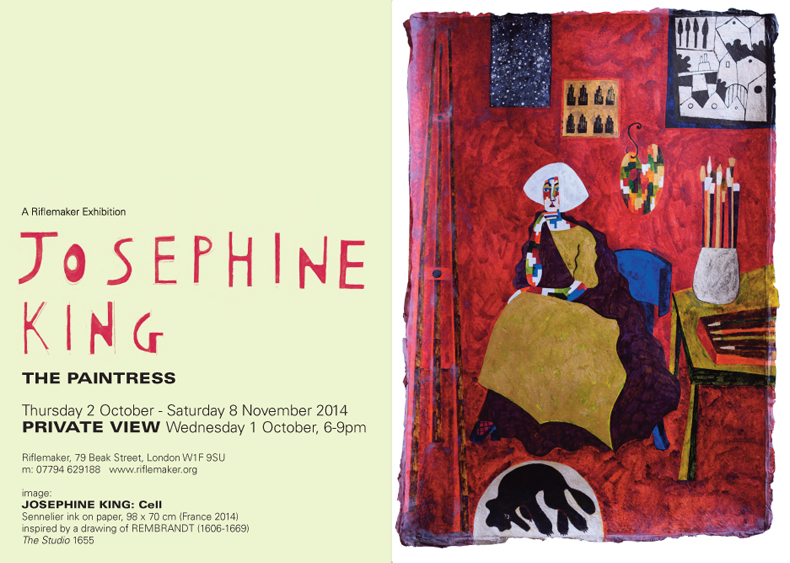 Josephine King (b. 1965 London) makes ink-paintings on paper. Self-portraits framed by confessional texts which document the often traumatic experiences in the artist's life; her heightened spiritual existence inside 'the atelier', her personal relationships and her day to day experience of living with bipolar disorder. Josephine King's third exhibition at Riflemaker, upcoming for FRIEZE WEEK October 2014, is entitled 'The PAINTRESS'.

Made in France in 2013/14 in two separate series, the new works are inspired by paintings in the collection of the National Gallery, London. King places herself centre-stage in the role of The Artist in The Atelier, a page by page one-woman performance celebrating, in King's case, the all too private, all too intense act of painting; the lone figure against a re-imagined, meticulously ordered, yet claustrophobic stage set - the shrine-like 'receiving-chapel' where it all happens - a seemingly physically perfect chamber plunged into psychological darkness by the storm of the illness. As if directed by Douglas Sirk or Minelli, the scene plays out an almost scripted act of creation within this technicolor world. Tipping life's balance within the act itself.

King was nominated for a South Bank Award in the Best Visual Artist category for her debut exhibition Life So Far. Her painting Uncontrollable appears on a UNITED NATIONS US postal stamp issued in 2013. She has been the subject of recent major features in The DAILY BEAST/NEWSWEEK, The OBSERVER and The WEEK.

"I am in the continuing pursuit of inspiration from the ancient painters. I feel their living power operating through me. I feel compelled to follow the way that they are showing me. I feel close to the things that they were close to: nature, required solitude, fervour, the power of colour to evoke feeling. The words I use enhance the moment of intensity. There is the poetry of words and the 'poetry of painting'.

In painting Modern Woman, I am looking outside of myself rather than just looking within. Showing myself naked in both mind and body depicts how it feels for me to be going against the grain of society. As a woman painter, I have nothing to lose"


at Christie's 'Multiplied' during Frieze Week at the Riflemaker booth:
a new series of small ink paintings based on masterpieces in the National Gallery, London 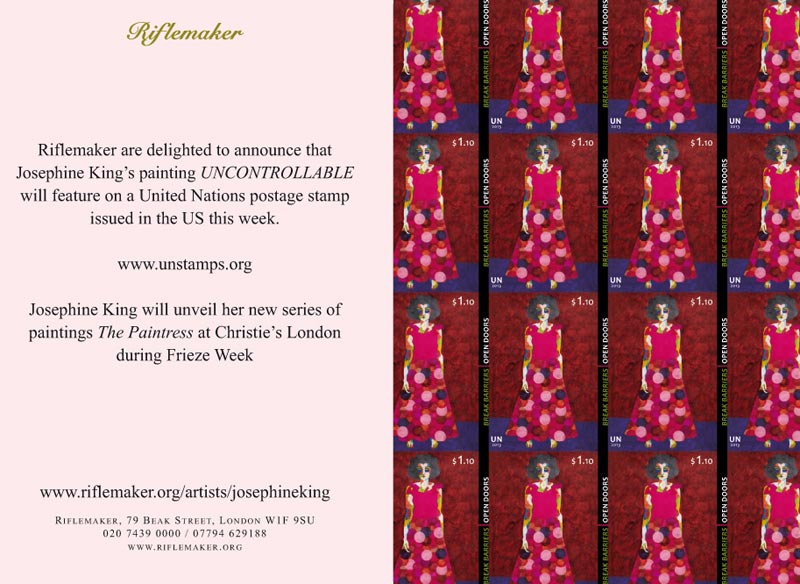 Josephine King remembers her first self-portrait and how it showed up out of nowhere. She was "really ill" with bipolar disorder, living alone in a flat in Amsterdam. "I was in psychosis. I was desperate, not at all well in my head. I thought, the only thing to do is a painting." She worked until a woman emerged against a brilliant pink background. This was the painting that launched five years of obsessive self-portraiture, framed with texts spelling out what it is to be manic depressive.

Josephine King has suffered from bipolar disorder her entire life. The illness, which was not officially diagnosed until 1999, has on occasions unbalanced her life to such a degree that she has attempted suicide. She grew up in the bohemia of late 1960s north London and has subsequently spent prolonged periods in Amsterdam, Berlin, China, India, Moscow and in Portugal, where during her art studies she modelled for Paula Rego. She can be seen as the stepmother in Regos 1995 work Snow White and her Stepmother.

King studied at the prestigious Gerrit Rietveld Academy in Amsterdam (1989-92) and achieved early success for her ceramics, being the only professional artist-in-residence at Lisbon's renowned 'azulejos' museum of tiles (1993-95). She also studied at the École National Supérieure Des Arts Décoratifs (1991) and at AR.CO in Lisbon (1993-94).


Josephine King (b.1965 London) makes ink-paintings on paper - a flat 'cut out and keep' portrait framing text which documents the often traumatic experience of the artist's life.
Her second Riflemaker exhibition, upcoming in March, is entitled
'I told him I was an artist. He said "can you cook ?" '

"They seem to me to be totally truthful pictures, from the heart. Many people will identify with these images" Paula Rego

"In painting Modern Woman, I am looking outside of myself rather than just looking within.
Showing myself naked in both mind and body depicts how it feels for me to be going against the grain of society. As a woman painter, I have nothing to lose"
Josephine King 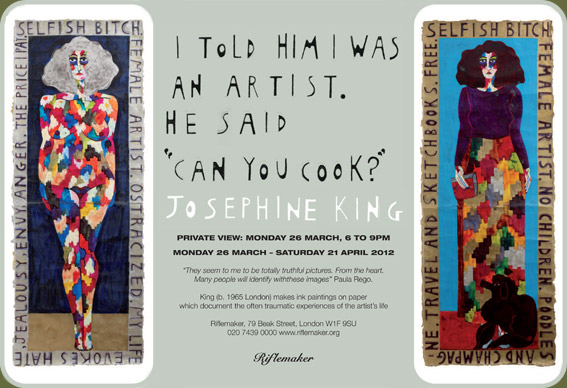 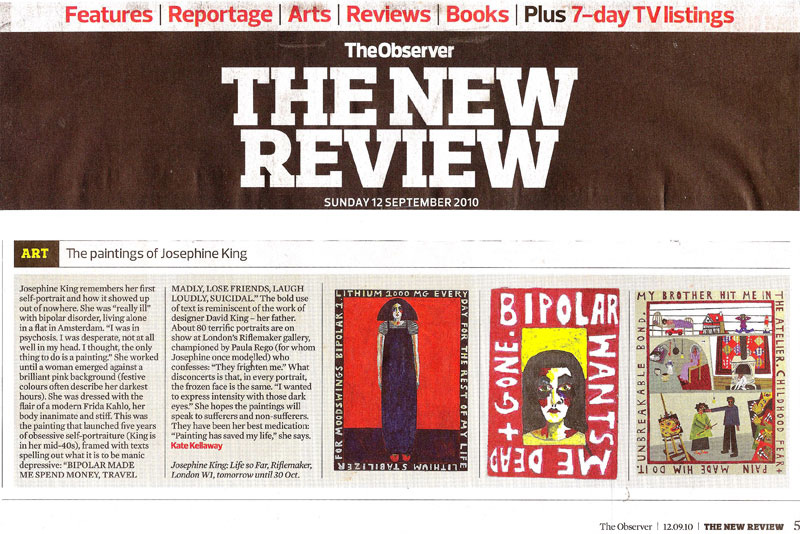 
"This is a grim and terrible subject, and the fact that she has shown it as playful and child-like images make it more frightening. They seem to me to be totally truthful pictures, from the heart, and they frighten me. Brave girl. Many people will identify with these images"
Paula Rego.

Josephine King (b.1965 London) makes ink-paintings on paper, a flat 'cut out and keep'-style portrait framed by text documenting the often traumatic experience of the artist's 'life so far'.

The subject of the work is King's extreme bi-polar mania, an illness which has plagued her all her life leading to several suicide attempts, whilst at the same time providing her with the subject matter for her art. The painting style is intensely colourful, almost a kind of pop Fauvism, featuring the artist in a variety of starched and patterned clothing often holding a 'prop' - knife, pills, tube of paint - though the work, rather than appearing depressing in any way is intimate, inspiring - apparently optimistic.

It is clear from the syntax of the compositions that King has an innate faculty for and interest in design, the poster layout of the paintings likely to have been influenced by the working environment of her father (the designer and photographer David King), though 'Life so Far' also reveals an interest in heightened stylisation - from haute couture and classical Indian portraiture to Victoriana, Art Nouveau and the decorative arts.

The Riflemaker book to accompany the Josephine King exhibition features an from Adrian Dannatt, writer, curator and correspondent for the Art Newspaper.

LIFE SO FAR is co-curated by Virginia Damtsa and Tot Taylor with Adrian Dannatt.

Art can still sometimes be a revelation. The first ever exhibition of 'paper' paintings by Josephine King provides just such a shock. King (b.1965 London) has been making art all her life, studying at the prestigous Rietveld Academie in Amsterdam, but having resisted exhibiting these paintings until now, the work has the unmistakable punch of a discovery of true import.

Josephine King achieved success early on for her ceramics, being the only professional artist-in-residence at Lisbons renowned azulejos museum of tiles, a page review in Flash Art leading to global distribution for these beautiful objects.

But this was before the discovery of her extreme bi-polar mania which so unbalanced her life, almost ending it on several occasions, yet ironically providing the artist with the subject matter for her mature, breakthrough work being exhibited today.

Here the chromatic tones, dancing patterns and lightness of touch of her earlier decorative oeuvre is fused with altogether more bleak subject matter; the blackest melancolia, drug abuse and destructive relationships along with several suicide attempts.

But these troubles are not reflected in any initial appreciation of the work. The paintings are overtly, outrageously attractive with bright palette and dazzling textural and tonal variation, so attractive that only slowly do you come to realise their message of utter despair, a despair whose only redemption is in the making of art, the making of this art itself.

King grew up in the haute bohemia of late 1960s North London until moving while still a child to Amsterdam. As the daughter of the renowned designer, and collector of Soviet material David King (now with his own permanent room at Tate Modern ) and a dedicated mother, her mixed cultural background and subsequent world travelling led to her pushing the boundaries of creativity with utmost daring. King does not hide her love for earlier women artists, often also troubled, but her composition and subject matter remain absolutely her own; an unmistakable 'signature' mix.

This view of the world, the artist looking out without any trace of self-conscious cynicism, with absolute sincerity, with complete generosity, is here laid bare for us.